News
You Are In: Home / News
News

Trustees of the Keewatin-Patricia District School Board met at Dryden High School on Tuesday, December 4, 2018, for the Inaugural Board Meeting.

The Keewatin-Patricia District School Board swore in it’s new Board of Trustees, welcoming four new members for the 2018-2022 term.  The list of Trustees and the areas they represent are below.

Individual on the Board to Represent the Interests of Indigenous Students

The Board of Trustees elected Cecile Marcino from the Kenora area as Chair of the Board for a one-year term following 18 years serving as Vice-Chair.  Trustees Dave Cornish, Barb Gauthier and Gerald Kleist all received nominations for the position of Vice-Chair with Trustee Gerald Kleist ultimately being elected as Vice-Chair for a one-year term.  Kleist has served as a Trustee for the Ear Falls area for 18 years.

The following Trustee appointments were made:

Cecile Marcino, Chair of the Board, stated “Thank you to my fellow Trustees for the opportunity to be your Chair and I look forward to the upcoming years with this Board.  I know that any challenges we face, we will face together as a team.  As a long-standing Trustee with the Keewatin-Patricia District School Board, I am very proud of the work of our staff and students and know that we will all continue to put our students and their needs first.”

The Keewatin-Patricia District School Board has become the first school board in Ontario to register all its schools for the OPHEA Healthy Schools Certification.

OPHEA’s Healthy Schools Certification recognizes and celebrates school communities for promoting and enhancing the health and well-being of students, school staff, and the broader community. Participating schools across Ontario complete the 6-Step Healthy Schools Process, which aligns with the Ministry of Education’s Foundations for a Healthy School resource.  Through a point-based system schools plan their Healthy Schools process over the course of the school year. They outline the steps needed to achieve certification as gold, silver, or bronze.

“For the first time ever, all schools from one school board are participating in OPHEA’s Healthy Schools Certification! The Keewatin-Patricia District School Board should be proud of all its schools for their commitment this school year in becoming a Healthy School, and in promoting and enhancing the health and well-being of students, school staff, and the broader community.”

“We know that active healthy living and exercise is important for everyone, and particularly youth. Being physical and in turn promoting physical and mental well-being has become a priority for all of us in our schools. We know that in Northern Ontario, physical health and well-being are even more important and we are proud in Keewatin-Patricia to ensure we are doing our best to encourage this way of life. Congratulations to all of our schools and their champions in each location for promoting and making this a way of being.”

OPHEA is a charitable organization that champions healthy, active living in schools and communities through quality programs and services, partnerships and advocacy, and is led by the vision that all children and youth value and enjoy the lifelong benefits of healthy, active living.  In the 2017-2018 school year, 16 KPSDB schools received the OPHEA Healthy Schools Certification with 11 achieving gold level certification.

Trustees met via videoconference on Tuesday, January 8, 2019, for a regular Board Meeting.

The January Kids Come First presentation titled ‘Bringing the Learning OUT through Coding’ was received by Trustees.  Doris St. Jules, Principal of Lillian Berg Public School, and Shannon Elliott, Grade 5/6 Teacher, were joined by Lillian Berg Public School students to share their experiences in coding with Trustees.  The students shared some insights into coding, including a definition of coding, why it is important, and what they’ve learned through coding. Trustees heard how the students are learning about perseverance, innovation, creativity, problem-solving and teamwork through their coding activities, with some students even designing their own video game.  Elliott shared how proud she is of her students and how coding encourages them to take risks, teaches them not to be afraid to make mistakes and to celebrate their successes when they overcome challenges.

Tim Flynn, Principal, Nicole Vingerhoeds, Vice-Principal, and student Isaiah Stahls from King Geroge VI Public School in Kenora presented the Special Education Assistive Device presentation.  Students at King George and schools across the Board area are using technology to support student learning, including different assistive technology and devices for Special Education students, including students with learning disabilities.  Technology, and in particular assistive technology, helps to remove barriers to learning for students. Isaiah shared some of his experiences with using assistive technology, including how it has supported him in completing his assignments by allowing him to use speech to text for writing rather than pen and paper, an area he struggled with in the past.  He shared with Trustees that he can write faster using the technology and that it helps him not to get frustrated with his school work so he can focus on completing his assignments.  Isaiah’s mother, Robyn, shared that they have seen improvement in many different areas since the introduction of assistive technology to support him in the classroom.

Sean Monteith, Director of Education, and Sheena Valley, Communications & Strategic Branding Officer, presented the 2018 Director’s Annual Report.  The Director’s Annual Report highlights the work of our staff and students in 2018.  Areas of focus in the report include our continued work in the area of reconciliation, academic success, mental health in schools, 21st Century learning, Indigenous student support and success, wrap around supports, specialized programs and strategic partnerships.  The report also includes a notable achievements section.  In 2018, the KPDSB celebrated a variety of achievements, including:

Richard Findlay, Superintendent of Business, presented the Ear Falls Public School Capital Project update.  Construction is set to begin on the $5 million project for the total renovation of Ear Falls Public School.  The project will be done in two phases, with the first set to begin in March 2019, and the second beginning in June 2019, with completion anticipated for September 2019.

Findlay also presented the Sioux North High School Capital Project update.  Work continues on our new school, Sioux North High School in Sioux Lookout, and excitement continues to build as we prepare to move into the new building from the old Queen Elizabeth District High School site.  Spaces built for our partners in the building, FIREFLY and Confederation College, are now complete and staff from those organizations are beginning their move into the building.  Staff and students are anticipated to move into the new building following the March Break.  A grand opening for the new $30 million school is being planned for spring 2019.

We are excited to announce the Early Years Open Gym in Kenora will continue during the month of March at Valleyview Public School. Families are invited to join us on March 5, 19, and 26 from 5:30 to 7:30 p.m.

The Early Years Open Gym is a free event for children ages 0-6.  It provides an excellent opportunity for families to socialize, have fun, and be active with their child(ren).  New for the month of March, thanks to the Salvation Army, Chef Pitre and the Hospitality and Tourism class at Beaver Brae Secondary School, a light dinner will also be provided free of charge for families.

The Early Years Open Gym would not be possible without the strength of community partnerships. We would like to thank all of our partners for working with us to ensure that kids come first.

Marnie Schuster, EarlyON Coordinator, stated “The Early Years Open Gym time was initiated by listening to the needs of our families, but it’s success is in having the support of our community partners who are genuinely invested in providing the best for families.” 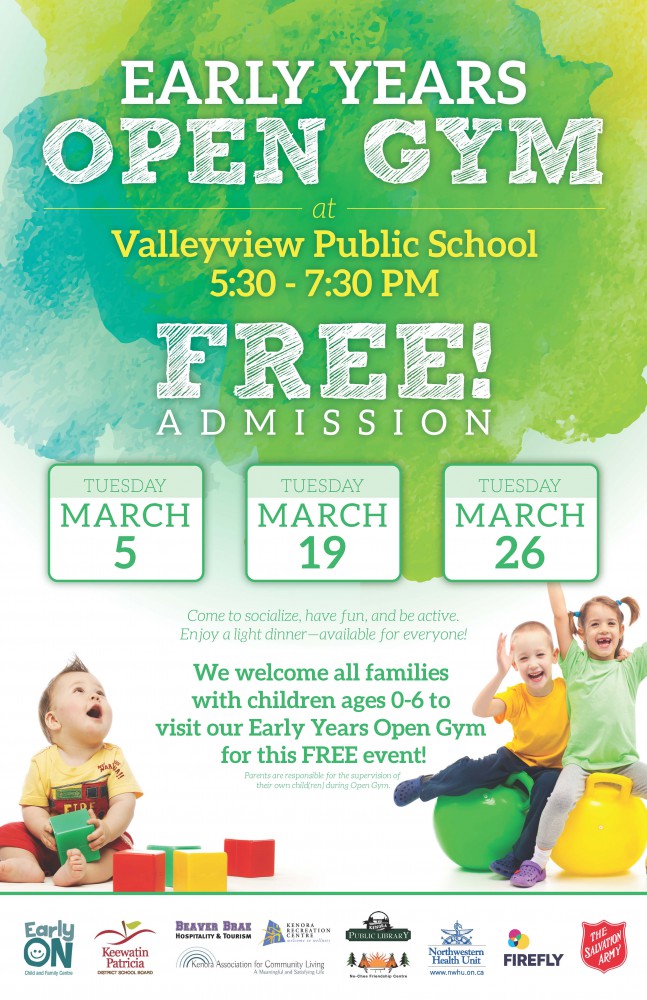 Trustees met at Dryden High School on Tuesday, March 5, 2019, for a regular Board Meeting.

Renovation work at Ear Falls Public School will begin this month with fully occupied classrooms by September 2019.  Non-classroom and exterior work will continue into the fall of 2019.

Trustees also received an update on the Beaver Brae Secondary School Capital Project.  Currently out to tender, Phase 1 of the Beaver Brae capital project is expected to reach a total budget of approximately $6 million.  With construction anticipated to begin in late April with completion in March 2020, the scope of work for Phase 1 includes:

Phase 2 of capital project work at Beaver Brae will upgrade the schools parking lot and athletic field and improve accessibility at the school.

Sean Monteith, Director of Education, stated “These three capital projects, including a complete rebuild of Ear Falls Public School and the renewal of the Beaver Brae Secondary School’s Tech Wing, have been identified as major priorities for the Board, and will bring equity of opportunities to the young people of Ear Falls and Kenora.”

KPDSB launches new section of website for Mental Health supports, checks in on Capital Projects for 2017-18